Dr. Moore suggests that first-time parents bring their baby in for a visit to the dental office during the first six months of age. This visit is not so much for the child, but more for the parents.

Too often ill-informed, well-intending parents make the serious error of allowing their child to sleep with a bottle in the mouth. Juices, milk (breast or cow), or other sugary drinks will pool in the mouth and can cause a severe condition called “Baby Bottle Syndrome”, characterized by severe destructive decay on all anterior teeth and some posterior teeth, sometimes with multiple abscesses and resultant pain. It can also affect the development of the underlying adult teeth by mottling the enamel and delaying eruption.

The best way to prevent this syndrome is to avoid giving the child a bottle to sleep with. If a bottle needs to be used, then only pure water is acceptable. Also pacifiers, if being used, must be completely free of any sugary substances, such as honey or previously-ingested milk. Ensure that the pacifier is washed with soap and water before giving it to the baby. Finally, encouraging the child to drink from a cup as soon as possible will help greatly. 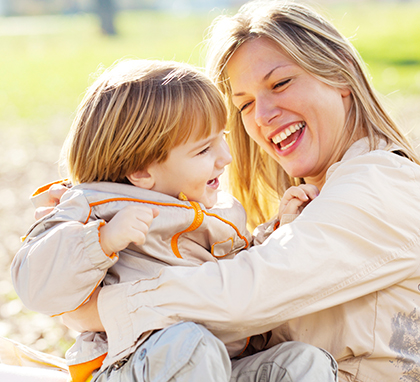 Pacifiers and teething rings are perfectly fine for all babies under the age of about five years of age. Even with thumb sucking, Dr. Moore does not get concerned until the child is about six years of age. After this age, however, these habits should be discouraged as the development of the upper jaw and tooth position can be adversely affected.

Thumb-sucking is a crutch and we all have them (yes, even adults). Sometimes overreacting to and/or focusing on a habit will actually make the child increase the frequency of the habit. Try not to focus on the issue until Dr. Moore indicates that intervention is appropriate. Very often, children start school, see that most other children do not do it, and stop. The beauty of peer pressure at six years of age!

However, if the habit continues, strategies such as mittens, ointments and rubber bands can be of limited use and a source of frustration. In these cases, an anti-thumbsucking device can be cemented in the mouth to discourage the child. Once the habit has discontinued, the appliance is removed. If you have a concern about your child’s thumbsucking habit, ask Dr. Moore what your best approach should be.

Primary teeth are also known as “deciduous teeth” because they are all replaced by adult teeth. Primary molars are replaced by adult bicuspids (or premolars), and the adult molars erupt behind the primary molars. In all there are usually 32 adult teeth, including the wisdom teeth. Sometimes, however, some adult teeth will be missing – these are referred to as “congenitally” missing teeth. The most common missing teeth are the lateral incisors, followed by the second bicuspids, and then the third molars (wisdom teeth). A panoramic radiograph is used to identify this condition around 14 years of age.

Since the deciduous teeth “reserve” space for their adult counterparts, it is imperative that the primary teeth be kept healthy. Premature loss, decay, or abscesses can adversely affect the adult teeth, resulting in the need for orthodontics (braces) later in life. If primary teeth become diseased or do not grow in properly, chances are greater that their permanent replacements will suffer the same fate.

Using wet gauze on infants’ gums is effective in removing plaque from the tissues. Once teeth erupt, special infant toothbrushes that fit on the tip of your fingers are handy to clean the new enamel surfaces. Dr. Moore discourages the use of fluoride toothpastes at this time, however, as the risk of ingestion is too great. Use water in lieu of toothpastes. Once the child turns two years of age, pea-sized dabs of toothpaste can be used with a regular child toothbrush. Make sure to encourage your child to spit out as much of the toothpaste as possible. Ingestion of too much fluoride can cause a condition called “fluorosis”, an unsightly malformation of enamel. Too much fluoride is as bad as too little.

Sometimes children around six years of age complain of toothaches – this may be the first adult molars erupting behind the primary teeth. However, sometimes children suffer toothaches because of a deep cavity that has infected the nerve. Sometimes they have banged their teeth in the front and have not told you. In the end, it is up to your dentist to help you diagnose the problem.

What you can do at home is try to reduce the pain by giving either acetaminophen or ibuprofen, and rinsing with a solution of warm water and table salt. If the pain persists, seek the care of your dentist. It’s always better to be safe than sorry when it comes to your children!

To setup an appointment.